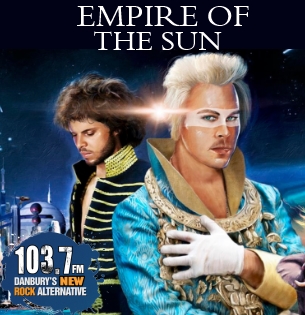 Empire of the Sun is an electronic duo from Sydney, Australia. The group formed in 2007 when Luke Steele of The Sleepy Jackson and Nick Littlemore of Pnau started collaborating. In 2008, their debut album, titled Walking on a Dream, brought them international success including certified double platinum in Australia, gold in the UK, and their single 'Walking On A Dream' topping the charts across the world.

Their second album, Ice on the Dune, was released in 2013 and in December 2015 they announced a new album to come in 2016. Their single 'Walking On A Dream' was featured in a national Honda commercial, reigniting the song's popularity and re-release.

Empire of the Sun is known for their elaborate and over the top costumes and stage sets, but they are not currently touring.

Watch the official music video for 'Walking On A Dream":