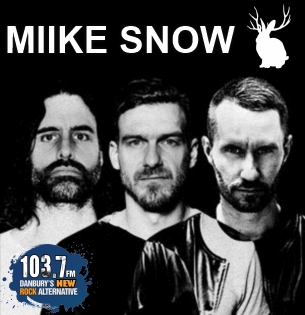 Miike Snow formed in 2007 when Swedish producing team Bloodyshy & Avant teamed up with American singer Andrew Wyatt. Bloodyshy & Avant members, Christian Karlsson and Pontus Winnberg, had a lot of success working for Madonna, Kylie Minogue, Kelis, Sky Ferreira, and several others. They even won a Grammy Award for Best Dance Recording for Britney Spears’ “Toxic”. Later, Karlsson and Winnberg met Andrew Wyatt in Sweden in 2004 while they were working on a new album for Britney Spears.

Two years after officially forming Miike Snow, the group released their first album, ‘Miike Snow’, with Downtown Records after releasing a single track for “Animal” just a few months prior. They went on to win several awards and create a variety of remixes of tracks for Depeche Mode, Kings of Leon, and many others. In 2012 they released their second studio album, ‘Happy to You’, and also several music videos to accompany the album. After confirming the making of a third album 3 years ago, ‘iii’ will be released on March 4th.