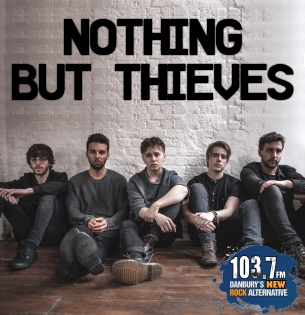 Nothing But Thieves is an English 5 piece, formed in 2012. They started with a single titled “Itch”, which quickly gained speed and was picked as Hottest Record and Track Of The Day on Radio 1. After that, they were chosen by My Chemical Romance’s Gerard Way and Awolnation to support their Europe tours. Nothing But Thieves later supported Arcade Fire and George Ezra, played at the NME Awards show, and then toured with Twin Atlantic, Darlia, and Young Guns on separate nationwide tours.

They signed on with RCA Records in 2014 and then their debut, self-titled album hit the Official UK chart at #7, peaked at #3 on iTunes, and was #1 on the vinyl albums chart this year. Nothing But Thieves’ single “Trip Switch” was released in June, but the full album is set for a February 2016 U.S. release and is currently available for pre-order.

Their sold out “Ban All The Music” UK tour started in October, and they announced a second British tour “Under My Skin” for April 2016.