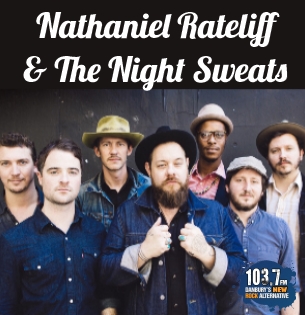 Nathaniel Rateliff grew up in rural Missouri with a passion for music. He learned to play the drums at 7 years old, taught himself guitar as a teenager, and then starting writing his own songs. Rateliff released his first album with Nathaniel Rateliff & the Wheel, titled ‘Desire and Dissolving Men’ with Public Service Records in 2007. He later released ‘In Memory of Loss’ with Rounder Records in 2010 in the US and later with Decca in 2011 in the UK. ‘In Memory of Loss’ caught Amazon.com’s attention, and received a 4 star review from The New York Times. In 2013, Rateliff quietly released ‘Falling Faster Than You Can Run’ with Mod y Vi records, and then set out on tour with The Lumineers and Dr. Dog.

Just this past June, Nathaniel & the Night Sweats released a self-titled album with Stax Records, with S.O.B. coming out on top as their lead single and one of the fastest rising songs in the country. The album sold over 21,000 copies in the first week, which put them at #17 on Billboard’s Top 200 Album Chart. And, Nathaniel Rateliff & the Night Sweats have only been gaining more popularity since their performance early last month on The Tonight Show Starring Jimmy Fallon.